Synology is known for there storage systems. My parents has a DS415+ and I am the proud owner of a DS1515+. The next step could be building a NAS yourself with tools like FreeNAS, but till now I was very happy with the functionality and security of these systems.

Last week my parents NAS stoped functioning. When starting, it showed four solid orange disk indicators and a blinking blue power button. After approximately 5 minutes, the whole system was automatically powered off. No idea why...

After an evening of googeling, I stumbled upon a post on the synology forum. He described exactly my problem! And I wasn't the only one. There is a flaw in the Atom C2000 family. This is the Press Announcement from Synology:

Anyone with a Synology DS415+, DS1515+ DS1815+, DS2415+, RS815(RP)+, or RS2416(RP)+ NAS, all of which are based on Intel's Atom C2538 processor, is eligible for the extended warranty period. All models purchased from this month onwards, Synology adds, include 'suggested improvements from Intel' which prevents any risk of premature failure. Anyone wishing to make a claim under the extended warranty is asked to email Synology on C2538@synology.com.

So both the NAS devices has this problem. Good to know. On different forums I read they just repair the systems and swap them to other owners. People ended up with damaged, but working versions, broken powerbuttons and smelling like smoke instead of there own clean device. I was way beyond the warranty so I had nothing to expect from Synology.

On the forum they figured out by comparing the old and repaired mainboard, that the only difference between a broken and a repaired one was just one 100 Ohm resistor. I don't need Synology for that! It's only some screws and watching a youtube video.

After some careful dismantling and a little soldering, the result was a working NAS. Just one resistor... 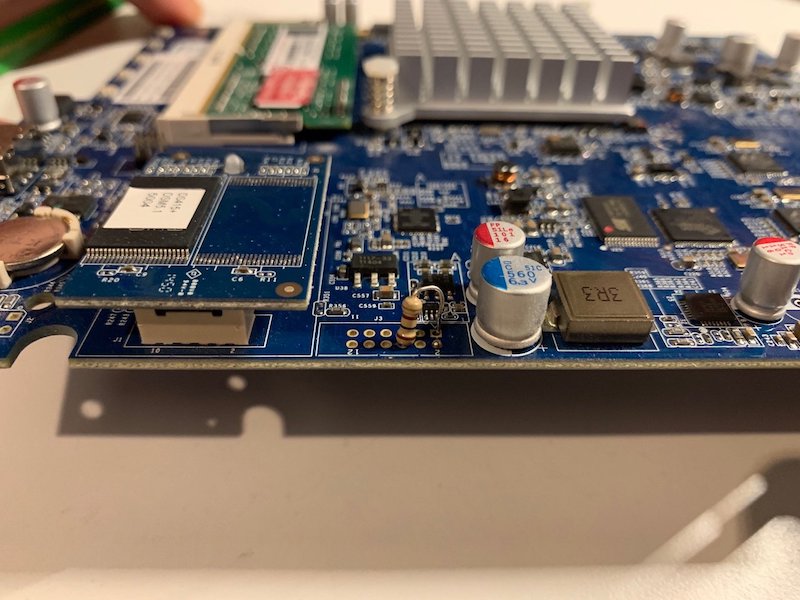