In the morning of July the 22th, I took the train to Schiphol airport. In Utrecht central station, I picked up The Omega and while waiting for the baggage drop-off, four other Dutch scouts joined us. The waiting line was long, but luckily not the longest line on the airport, although it was next to the longest line, what makes it a little more bearable...

During the security check, of course my extra battery pack has to be checked twice. I always have problems with my hand luggage. After the security checks, the big waiting is started. In Schiphol airport, there is a special (small) part for EU flights. It's not (yet) as good as the international part, but good enough for a cup of coffee and something to eat. We started making WOW air jokes, and got more than enough time for it... 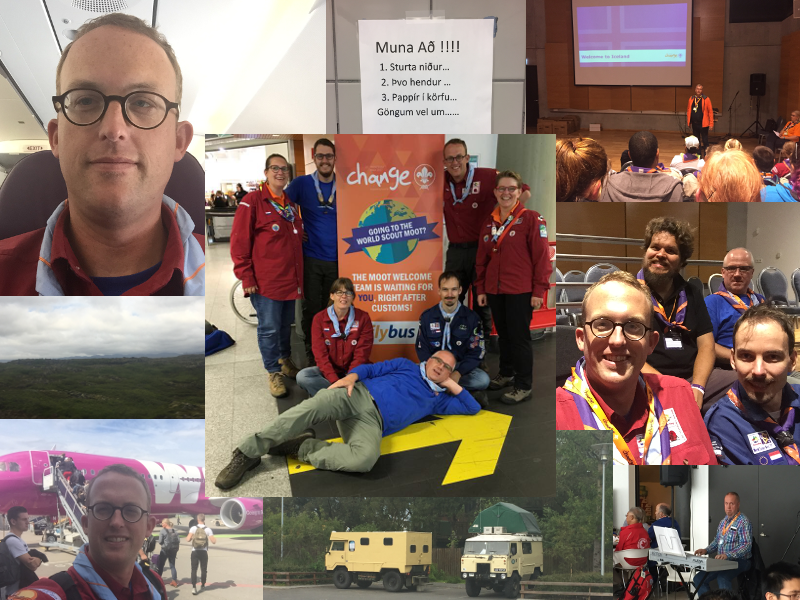 The flight went smoothly and after three hours of flying (and sleeping), we arrived in Reykjavik. There was a welcome committee of Icelandic scouts! Very cool! They helped us with the right directions and we bought a flybus ticket to the capital. It doesn't matter if you buy a ticket online, or at the last moment at the airport. The price is the same and in both cases, you have to stand in line to get your ticket. But the transport to the city is perfect! It's a 45 minutes bus ride and you are directly at the place where you wanted to be. This was also my first introduction with the Icelandic landscape, gray and flat.

We arrived at the sportcenter Laugardalshöll, where all the IST (International Service Teams) can apply and get all the gear and trainings. There we meet the other Dutch IST's. 25 in total. We had to attend to the central IST training, that would explain all the do's and don'ts, schema's, telephone numbers etc. etc. After you got your basic training, there was a moot lunch box as reward! It was also your daily ticket for getting food, at least that was the idea.

Our sleeping place was a school, not far from the sportcenter. Lucky this was the place for all the small contingents, so we had more than enough room. This was not the case for the UK. They were sleeping in school's as well, but theirs were overcrowded. It was also the first time I experienced the light at night. It didn't went dark at all... I had no real problems with it, but it felt really strange.

So the next day we had the IST welcome party. Very nice and full of speeches, Icelandic folk music, comedy and DJ's. A nice opportunity to get to know each other.

The next training I had to attend to, was my specific jobs training. For me, it was security. I started to understand how the Icelandic people work. They have a phrase, "þetta reddast", with means "it will all work out okay". Planning ahead is not really there cup of tea. So you have to improvise and not everybody is happy with that. Lucky most Dutch people like this way of working. We got all the information we needed and I went off to the lunch, to see my bother's marriage.

Yes, my brother got married on the 24 of July. For me it was not possible to attend to his wedding, so I asked a friend to set up a live video stream (facetime) so I would be there virtually. It is really nice to live in a time where this is technical possible! It's still not the "real" thing, but close enough. 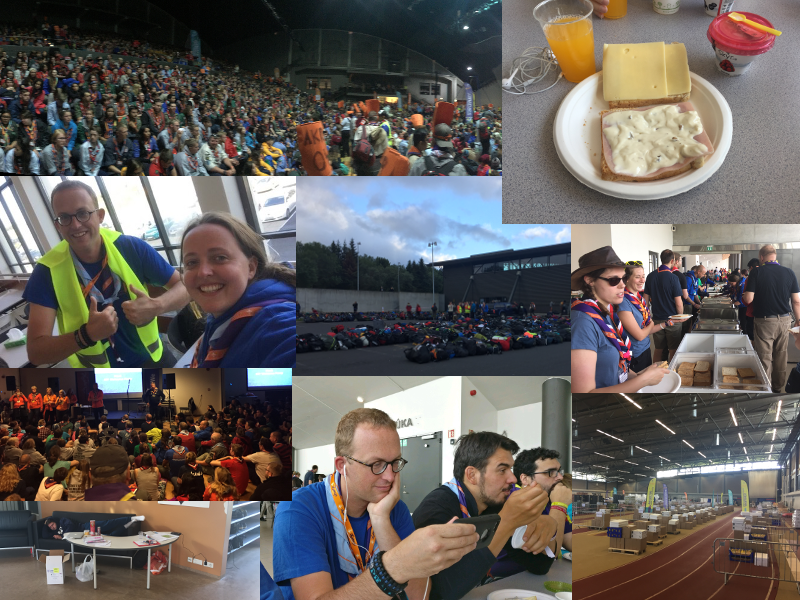 Between all the trainings and activities, we as IST, did all the help we could do. We made, for example, about a 10.000 sandwiches, sorting out all the food for the expedition centers and helped the participants to find the right busses. It's the work that has to be done and making sandwiches together can be a lot of fun!

The next day there was the opening ceremony. Very cool. It was also the first time we met our expedition team. From that moment on, we were an international IST group. And because there was no leader for the IST part, I got the leaders hat. But that was mainly because I was the first IST on site. Without even a list of IST personal, my job was really easy.

The opening was nice! A mixture of acrobatics, speeches en music. After the opening ceremony, the big moment was there. The Moot 2017 has begun! In the main sport hall, everybody his backpacks were collected (6.000 pieces), together with all the food for at least 5 day's. So next job, loading the busses with luggage and food, and off we go, to Akranes!

Read the other parts of the story: