After a good night sleep and a long conversation with the local shower, I could already laugh about yesterday! I’m in Japan with all my stuff on the right day! That’s all what matters.

Speaking about showers, they really have good showers here! There’s beside the front door to the shower, a separate door between your dry stuff and your wet body. But why is the soap tray that low…

So after packing my bag, I went to the 7-eleven, a small supermarket which is open 24 hours a day, and bought me some breakfast. It was my intention to eat the food while I was going to Meiji Jingu by train. But it’s a good habit in Japan to treat your food with respect. So you don’t eat it while walking on the street, nor in the train. There’s actually nothing you’re allowed to do on the train exept sitting and using your telephone in silent mode.

So I went to Meiji Jingu, a very beautifu park with the Shinto shrine that is dedicated to the deified spirits of Emperor Meiji and his wife, Empress Shōken. It’s really a quiet and peaceful place. Perfectly maintained, just as you would expect in Japan. It’s actually a perfect place to eat my breakfast. I think it was socially “not allowed” to eat in the park, but I was starving and found a quiet place to sit. So I ate my food “with respect”.

Then I headed to the probability most busiest crossroad in the world! I wanted to see this! It’s really fabulous! There’s a Starbucks on one side with a birds eye view over the crossing. If you’re there, go and grab a coffee and watch! It was actually a very bad day because there where not that many people, but still a lot! Later on I made a movie during crossing the street.

It’s also the neighborhood of the creative people. A lot of them are dressed in unusual, but fashionable clothes and bleached hair. So there had to be an Apple Store. I found it, but it was a little disappointed. A small shop without the fashionable look.

I was wondering why everybody was walking with an umbrella. I had a raincoat and till the start of the rain I was quite happy with it. Rain and hot weather in combination with a raincoat is not funny! I also bought an umbrella.

Every technical person loves Akihabara (electric town). It’s not far from my hostel and has really a lot of electronic products! If they don’t have it, it doesn’t exist. And if the shop isn’t an electronic store, it’s an anime, or food store. So I ordered some food. 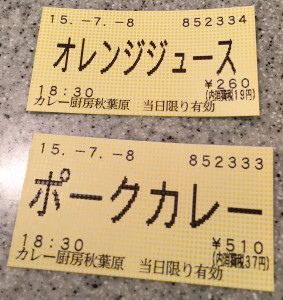 Ordering food is a little different than we used to be. You don’t talk to the waiter to place your order, that’s too many social interaction. There’s a machine for that! So my first mistake was not noticing the machine, the second one was not knowing how it works… You first place your money in the machine and then select your desired food. Not the other way around, as I tried. There’s probably a text explaining that, but I couldn’t read it. The food was nice and the waitress did a good job in helping. I headed home to catch up some sleep I was still missing. It ended up chatting to people offline and online.

Next day I first got my breakfast and then went back to eat it. Today’s program was visiting the national museum and a friend of mine who lives in Tokyo for about 10 years. Because it was still raining, an indoor activity was preferred. The museum is nice and covers a long history of Japan. From clothing to swords. Very old and beautiful.

In the afternoon I got to the university to see Jorg, a friend of mine. He works there as a researcher on flight simulators, so I had to give it a go! I landed a Boeing on Haneda airport, after first crashing 2 times! But it was good fun! 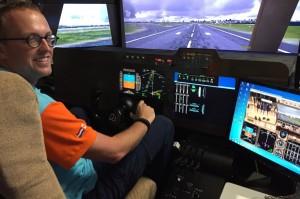 Then we went to his home and meet his wife. It’s really nice to see the real home were people live. It’s really small, but you get used to it. But a Dutch home is like a palace. So never complain about the size of your home, you could also live in Tokyo!

And of course I had to eat real Japanese food. That was really a culinary tour! It tastes very good and 90% of the ingredients I had even never heart of! Nor can I repeat what is was, but it was good! Thanks for the introduction in the Japanese kitchen! 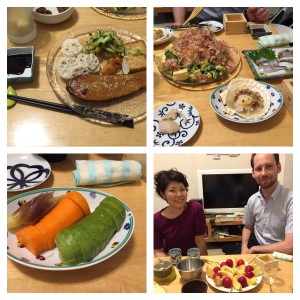